Can He Goose the Rock With His Crosse? Lacrosse Terms Defined

Lacrosse has a language all its own. Like a deep downfield pass, game talk can quickly fly over the heads of the uninitiated. Before the next New York Lizards game, lax newbies can learn the meaning of these 21 lacrosse terms to keep pace with the fastest game on two feet.

Watching a lax game without knowing the lingo can make it tougher to follow the action. Did you ever wonder what different penalties were called? And, what is warding off anyway? If you can learn these simple lacrosse terms, we guarantee you will enjoy your next Lizards game that much more.

Three offensive players that generally do not cross midfield. Attackmen are known to be stick-handlers and shooters who play close to the goal or behind it.

To strike an opposing player with a lacrosse stick in an effort to dislodge the ball.

To move the ball from the defensive end to the offensive end of the field.

How a player rocks their stick back and forth in their hands to create a centrifugal force that keeps the ball in the stick’s pocket while they run.

The circle surrounding the goal that protects the goalie from opposing players.

A traditional term that refers to a stick used by a lacrosse player.

Three players who protect the goal with long poles. They remain on the defensive side of the field even when their team is on offense.

When a player uses their stick to knock a ground ball to an open teammate, instead of picking up the ball and throwing it.

A loose ball on the ground that is not in the possession of either team.

Some penalties require a player to sit in the penalty box. That team, which continues the game without that player, is said to be “man-down.” The opposing team is “man-up.”

A popular type of pocket for a lacrosse stick, which is made of woven nylon.

Three players who are allowed to play at both the offensive and defensive ends of the field.

The netted section of the head of a stick where the ball is held.

To pick up a ground ball by placing the head of the stick over the ball and then pulling the stick backwards on the ground so that the ball rolls into the stick’s pocket.

The traditional way to pick up a ground ball by placing the stick on the ground while running through the ball.

An offensive penalty where a player who is cradling the ball one-handed uses their other hand or arm to move, block or interfere with a defender. 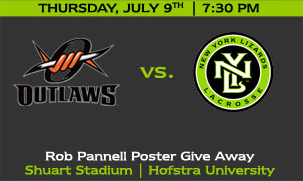